This is one of those movies that you know you’re about to watch something that’s not going to great or something you won’t even remember watching the next day. So why watch it you say? Well sometimes you just need to watch something stupid and hope that maybe they actually pulled off a decent movie. Nope, they didn’t.

There are many factors why this movie didn’t work and I wonder how did this even get greenlit by a studio? All it took was big names to back it I guess or maybe it was a test run to see if Sofia Vergara could be a bankable star outside of television. Unfortunately with writing as bad as this that experiment is going to fail regardless of who is running this ship. There are so many problems with this script, it’s completely disjointed and all over the place. I really don’t think Witherspoon and Vergara’s onscreen chemistry (which I don’t feel there was any of) can withstand such a mess of a script. That’s another huge problem here is the two leads don’t play well together, there’s a lack of comedic spark between this duo and the only way for this movie to work is if your leads play well off each other and have some sort of comedic chemistry. It’s the only way for a movie like this to work. I understand Vergara taking a stab at this movie, but what the hell is Witherspoon doing in this, especially coming off of her Academy Award nominated Wild! We all know what these two stars are capable of so I’m not sure how they read this scrip and thought this is going to be great. Also, side note… Randy Kazinsky who plays some sort of love interest for a couple minutes, needs to really work on his accents, yikes.

I give the movie a couple points for having some humorous moments, obviously not enough to hold the movie together, but there are a couple scenes that I did laugh out loud. With a better script the movie might have been slightly better, however I don’t think its intensions were ever to be something great, and that’s just it. A dull disjointed weak comedy you’ve already forgotten about. 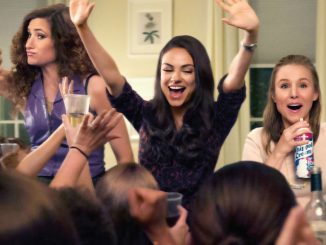