Amy Schumer has crossed over from stand up to television and now to movies in this successfully fresh and sharp hilarious film! I was absolutely impressed with the writing! Her story isn’t anything we haven’t seen before, but she has taken her comedic style and infused it into a cliché ridden romantic comedy and turned it into a new and fresh funny take on it. There’s plenty of laughs throughout, but there are also some serious moments that surprised and impressed me. Also impressive is Tilda Swinton who is unrecognizable and brilliant in the role of Amy’s boss, she steals every scene she’s in!

The only small problem I had with the movie is my usual issue with Judd Apatow and his continuing to drag comedies out far too long than they need to be. Irrelevant draggy scenes, one in particular featuring some surprise cameos doing an intervention I thought was a waste of time and just slowed the movie down. Granted this is one of his shorter movies, clocking in at 125 minutes.

Trainwreck is one of the best comedies I’ve seen in a long time and Schumer deserves all of the praise and recognition coming at her, she is great at what she does and this movie is proof of that. 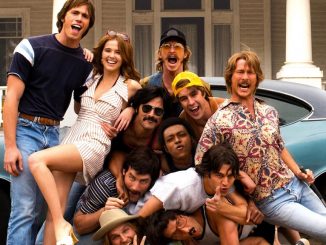